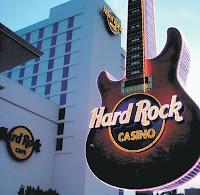 The case is No. 1:10cv07244-UA, filed in the United States District Court for the Southern District of New York.

According to the suit, Hard Rock Café was founded as a celebration of Rock and Roll, good times, and fun. But sexual harassment, violence and crime are not part of its credo. Apparently, TruTV has no plans for canceling, or altering the show, which it hails as a main revenue source. If Hard Rock Café wins, Hard Rock Hotel may have to change its name.